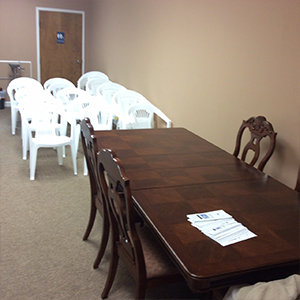 In 2006, Clara went on her first mission trip to Africa. It was during the night in her hotel room following the day’s ministry and as she reflects on the day, she realized that so many of the women did not have a Bible. Clara had left her original family since she was 12 years old, but the Bible her mother gave her became her most cherished possession. She then asked God how could women learn about God without a personal relationship through the Word of God. Clara will never forget God instructing her to provide Bibles to those who have none.

Therefore, her first assignment was to use her income tax for that year to purchase her first 50 copies of the Bible from Amazon which became her tradition. Years later in Winder -Barrow County in the United States as a property manager, she used her office as a meeting place to teach the Word of God and financial freedom to first time home buyers and tenants who wished to own a home. Clara began to extend her outreach to the neighborhood and often marked out a location at a set day and time. She would give copies of her book and a Bible to anyone who stopped by with counseling and prayers as requested.

In February 2010, Clara filed and received her non-profit status. In spite of her IRS accredited 501c3 status, Clara continued to spend her personal income on supporting people in need. At that time as God blessed her she began to partner and became a member of a charitable company called “NAEIR”, and other companies called; Apparel Deals a fashion wholesale; Spring Import; 247 Fashion Store; Pac import; and more. There she spent her own money to purchase truck loads of items for the foundation which added to her outreach in which she usually picked a location. Eventually, God lead Clara to Gainesville, Georgia where the foundation had a physical address on April 2013.

The location address was 176 Martin Luther King JR Boulevard SE Suite 400 Gainesville, GA 30501. It was at the location that God added to her vision: 1. Hold a support group for women with topic ranging from substance abuse to freedom and marital issues etc. 2. Help people get back to school or back to work through her assistance of paying their GED certification and mentorship. 3. Allow other ministries to hold their meetings in the location. Several other women believed in her mission and through their suggestions & support, she began to take clothing donations.

Shortly after, Clara went back to pursue her second Master’s degree at Liberty University and with less income, she was unable to fund the foundation which had then expanded to more than she could fund out of pocket. She then began to run the ministry out of storage while she completed her one-year residency as Chaplain at the North Georgia health system in Gainesville, Ga. Using her saved salary, she came back to reestablish the foundation with added computer literacy classes. The current address is 675 EE Butler Pkwy SE Ste G Gainesville GA. 30501. or P.O. Box 588 Gainesville Ga. 30503.

The key to learning, perhaps, lies in our willingness to try. Clara Stephens has proven her willingness. And her faith. She said it’s now time to the lessons learned and move forward. Like any new endeavor, Clara experienced some ups and downs. In time, she decoded to close the thrift store, where she had helped dress men and women for success. The clothing bank also served the homeless and aided victims of domestic violence while providing funds for business net-working, financial literacy and computer training courses. But if she had never opened the retail location in the first place, today might not have come. Having the retail location allowed Clara to make her name known in the community, develop supporters and additional resources among local nonprofits and civil organizations and serve those in need. That, certainly, is the tip of the iceberg when it comes to what she’s learned over the past years according to Clara.

Clara has now moved her practice to into a suite at the North Georgia Community Foundation on Oak Street in Gainesville Georgia. In, fact, Clara is confident she and her client can benefit from the available conference rooms as well as the build-in-connections the other in-house non-profits provide. Having like-minded individuals and charitable organizations in the same building makes Clara feel much more comfortable and secure. Clara I. Stephens an immigrant from Nigeria, was ordained by the Congregational Holiness Church International N GA District, she has worked as a chaplain at Northeast Georgia Medical Center in Gainesville and Braselton, served as lay leadership roles at Free chapel Worship Center Church in Gainesville Ga, raised a family and published two books recounting her travels and travails. More importantly, Clara and her team of professionals are highly skilled in meeting the varied needs of their target population.

Women for Christ International Foundation Inc.
WHAT: “empowering women & Families for life. We welcome all people without regard to culture, race, ethnicity, or religion.” WFCIF serves women & families from all walks of life and helps to identify and address barriers to success. Through WFCIF, women and their families receive free counseling services, literacy training, and resources needed to ensure that they can lead healthy and productive lives. Focused on the impact of Post Traumatic Experiences on Women and Families, providing Information on Available Free Resources & Programs.
WHERE: 615 Oak Street, Suite 900, Gainesville Georgia 30501.
MORE INFO. 678-971-1746 (Ext 280), 678-936-5958, www.wfcif.org, info.wfcif@gmail.com, https://www.facebook.com/WFCIF/, www.linkedin.com/in/clarawfcif